Sports and athletics play an integral role in our co-curricular program here at UWCiM. Not only they help us stay healthy, they also help us meet new people and have fun after long days of classes. Our Activity CASes are as diverse as our student body, ranging from rugby matches on Sunday mornings to relaxed yoga classes in the afternoon.

In case a student is already following some sport activity that he/she would like to continue pursuing, but it is not offered in the college itself, it is always possible to join local Mostar sport clubs.

April 2015
The most amazing things about the martial arts it's the fact the martial arts are not only the sports. As the name says it is an art. There is so much more than just pure fighting ("martial"). It has its own heritage, culture. Behind all of this fighting, there is a language, philosophy and the way of living. Having this background makes the martial arts so special to train.

April 2015
I continued silking even in the second term. I learn two new tricks and sometimes when I would get tired I would just try to climb the wall or learn something from gymnastics from one girl who was also going to the climbing CAS. I learnt few things from gymnastics that have showed to be useful for the silk as well. Climbing helped me to stay in good physical condition, to release my stress, sometimes it even took away my migraines and helped me to sleep better in the night. It also made me realized that I want to become better at silking and gymnastics and continue with it even back home. Even though I still have a lot to learn from both fields.

February 2015
Today the rugby training was extraordinary! A member of the Bosnian national rugby team joined us to teach us some basic skills. He was very nice and only when we started, did we actually realise how little technique we have, which made it all the more necessary that he was there.

We started with the usual warming up - I am getting so much better at catching and throwing at high speed! - and then we proceeded to passing and tackling techniques.
The passing was surprisingly fine, although I still struggle to coordinate my limbs every now and then, but we are getting better and better tuned at each other, which is amazing!
But then…. the tackling. Although it is one of the reasons that I chose this activity in the first place, I still have a hard time with putting actual force in a physical interaction with someone else. Even if Aviv tells me that I can really push as hard as I want (and his muscles confirm this even more convincingly), I still cannot bring myself to actually grab his legs and pull him down with all my weight. No idea if that is the pacifist in me, or if I’m just too afraid to get hurt :)

However, after two hours of rolling in the grass, I did get a bit better and in the final game I managed to tackle Parker, something that had never happened before. Practice makes perfect, I guess...

April 2015
Today was the last day of the tournament for the UWC football team. We were beaten 4-1, but played our best game (in my opinion) of the tournament. We possessed the ball meaningfully and had numerous chances on goal (Peter and Uzi both beat the goalie but couldn't get past the post). I played reasonably well as goalkeeper, making several saves that I normally wouldn't, but was also burned pretty badly on a 2-on-1 that got through our defense. I think the difficulties that the football CAS has in such tournaments stem largely from a lack of time on the pitch, as evidenced by the fact that we steadily improved as the tournament went on.

A snapshot of Football CAS at UWC Mostar. 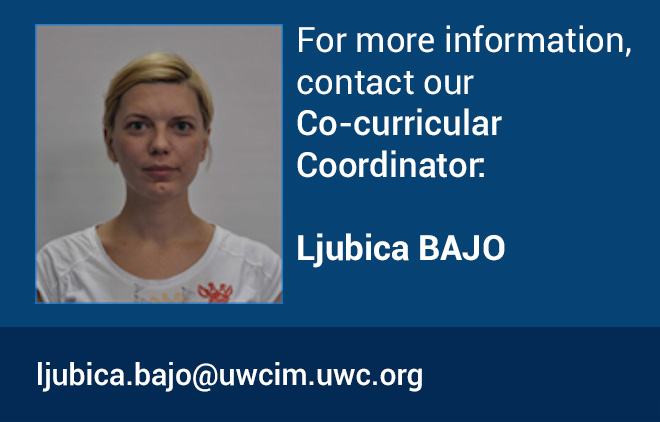