It is my great honour to welcome you to UWC Mostar. At UWC Mostar, the UWC mission meets real practice, as we are given the opportunity to share our school with the local community...

UWC schools, colleges and programmes deliver a challenging and transformative educational experience to a diverse cross section of students, inspiring them to create a more peaceful and sustainable future. United World College in Mostar (UWC Mostar) was founded in 2006 as the core part of the Foundation Education in Action. It is one of the 15 colleges within the UWC movement.

UWC Mostar is the first UWC in the Balkans and the only one with an explicit aim to contribute to the reconstruction of a post-conflict society. The college educates students to learn and appreciate their differences, while promoting equality, tolerance, and critical thinking.

UWC Mostar students come from all over the world, as well as from all ethnic groups in Bosnia and Herzegovina and the region. All students live, study and serve in the community together creating a unique example of integrated education in post-war Bosnia and Herzegovina. The College also serves as the Centre for Professional Development of BiH Teachers who receive training in international educational standards. 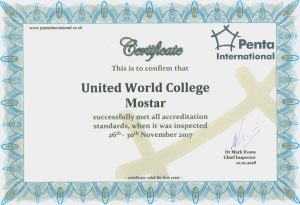 UWC Mostar is accredited by Penta International - one of the leading independent providers of educational training, consultancy and inspection services in the United Kingdom and overseas.

Stasia (UWC Mostar ‘10) graduated from Dartmouth College in 2014, returning to Mostar to teach Math and Theory of Knowledge. She is originally from Belarus, and mostly doesn’t mind being confused with students.

Su is the first student from Myanmar at UWC Mostar, and the first Aung San Suu Kyi Endowed Scholar. And she must be one of the first Burmese people to live in Bosnia and Herzegovina.

When Uros (Serbia, UWC Mostar ‘14) and Antonija (Croatia, UWC Mostar ‘13) decided to kiss in front of an old woman who disapproved of their hand-holding to show her what peace looked like, they had no idea the image would go viral.