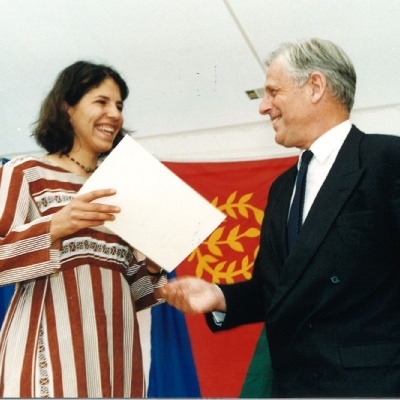 Tribute by Henry Thomas, former colleague of David at UWC Adriatic and friend.

David Sutcliffe was a very remarkable man: a visionary and a leader; a charismatic figure without vanity; always a teacher and always wishing to learn (his interests were myriad); a man of action (who sailed single-handed across the Atlantic in 1976); and a man of deep reflection, especially about the role of education in a fractured, dangerous, “globalised” world.

He was also the man who played the “village idiot” in a staff production of the Victorian melodrama “Maria Martin or the Red Barn”, rehearsed in secret and performed for the students in the courtyard of Duino Castle. He was the van driver who carried a group of students across the Balkans to Mount Athos where they spent Project Week walking from monastery to monastery, listening and talking with those they met. He (and Elisabeth) made it a priority to attend all student shows, plays and musical performances (he was a driving force behind the creation of the Scuola di Musica) and the Sunday evening, student-led International Affairs sessions. He attached a particular importance to these because he thought them vital to a UWC education. 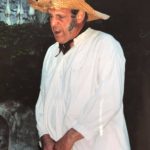 When the College made a “public appearance” in Friuli-Venezia Giulia or in Rome, David was always present, walking with and speaking for the college community. For David, I think, the College was more than a school. It was a community dedicated to a wider purpose: the academic, extra-curricular, pastoral, social and communal life were all directed to the aims now captured in the mission statement. What struck me and enthused me when I first came to Duino was that David argued (sometimes against stubborn resistance) that there could be no hierarchical distinction between the academic, the extra-curricular and the pastoral life of the college: they were different but all essential to the community’s purpose. It was this dedication to a common purpose - shared by all staff and students, living together - that created the ethos, the “atmosphere” and experience of UWC life.

In part, this “idealist” view of collegiate life was shaped, as he often and forcefully told me, by his experience during the war years at an English boarding school on the Yorkshire moors. There he’d been given his love of languages by teachers with a passion for their subjects, and discovered the rigorous pleasures of the outdoor life, running on the Fells. I vividly recall the fascinated incredulity of a group of students in the Mensa when David recounted one school experience, prompted by a casual remark that the heating yet again was not working in Foresteria. He told us that in his time at school, pupils were required to sleep with their windows open two inches even during winter and would often find a sprinkling of snow on their blankets in the morning! His presence at lunch-time in the Mensa, eating together with students and staff, was fundamental to how he conceived his role as Rettore.

He was, of course, ”The Responsible”, the authority who exercised the final say, but he was also a man who invited and heeded the counsel of his students and staff. Every day there were conversations formal and informal; there were weekly Monday 7.40 am meetings with teachers, and regular full college meetings. Very often he was available in his office well into the evening and when crises occurred, (as they did!), he invited anyone to come and speak to him in confidence (“before midnight”). David took seriously the views of other people even when he profoundly disagreed with them.

He sought the best in people and encouraged them to embrace their passion, their skill, their talent, their vision ( “You have more in you than you know” he said, quoting Hahn), but always gave that celebration of individualism a clear context: it was to serve a greater good. That sense of purpose was, I believe, the product of a very specific set of experiences: his experience of being a five year old evacuee in Lincolnshire from German-occupied Guernsey (where his doctor father remained for the duration of the war); his experience of reading German and French at Cambridge in the immediate post-war years; and crucially his years at Salem where he met Kurt Hahn. But the man was more than the sum of his “experiences and influences”; he possessed a generosity of spirit, an imaginative sympathy, an acute intelligence and a kindness which made him loved, as many tributes on his passing testify.

Knowing David has been one of the great privileges of my life and I am proud to have counted him a friend. David B. Sutcliffe's family has sent the following message to the UWC community: 'We have been greatly moved and are immensely grateful for all the wonderful messages, memories and thanks to David, which have comforted and supported us at this sad time. David’s funeral will take place at All Saints’ Church, 122-122A High Street, Lindfield, Haywards Heath, West Sussex, RH16 2HS on Friday, 29th November at 11.30 am. Family and friends are welcome. There will be a reception afterwards at The Tiger (church hall) next door. Family flowers only. According to David’s wishes, any donations should please go to the UWC Mostar Endowment Fund for student scholarships. It is thought that there will also be a memorial event for David held in the New Year. With love from Elisabeth, Michael, Veronica and families.’