The event is especially significant as another way to foster the integration of communities both within Bosnia and Herzegovina and the wider region of former Yugoslavia. Besides its effects on the global awareness and public speaking skills of participants, the conferences bring together young people from all different areas in the Balkans. Getting to know people from other ethnicities gives all the participants the opportunity to break stereotypes and make more open, multi-ethnic friendships.

Voices of Mostar forms the final project for the first-year Balkan Studies class. The task is simple: choose a person from Mostar or from the region and interview them, recording their story. Students interview parents and grandparents, fellow students and teachers, canteen ladies and people from their CAS activities. We find their story as we talk to people, and it can range from high school awkwardness to love, or loss to the song of their lives. The story guides the experience. Students generally make a video of the interview, or record only audio to pair with still images. It is up to them to use their creativity and find the best medium to fit the message.

We all have stories to tell, stories we lived from inside out. We give our experiences an order, organizing our memories into narratives, stories: Voices of Mostar gives students the opportunity to discover stories around them.

To see some past Voices of Mostar, check out our youtube channel.

Here are some of our favorite links to other resources for oral histories:

An event organized by UWC Mostar Physics students and the teacher. It is aimed to the physics students from other high-schools in our Canton. It offers presentations, lectures, and lab workshops.

Festival for Children is an annual event, organized by UWC Mostar and dedicated to children and youth with special needs.Over 400 children participate in the programme every year with dance performances, recitals, singing and games. UWC Mostar organizes numerous workshops for the children of Mostar including a painting workshop, creative workshop, face painting workshop, sports games and fun with clowns and entertainers.

Visitors of the Festival are also able to purchase handcrafted souvenirs made by institutions for children and young people with special needs, in that way directly supporting the work of these groups.

United World College Mostar, in cooperation with Mostar City Youth Council, organized the first Street Arts Festival in May 2012. Since then, the Festival has become an annual event with an aim to initiate young people in open public space and local community and promote street art and culture. The S.A.F. program includes the painting of large murals around the city, entertainment programme, music and dance performances, artistic animations, drumming workshops, juggling workshops.

During the festival days, Mostar becomes a merge of color, melody and dance refining public spaces and enriching the urban culture of the city. The festival is attended by hundreds of artists from different fields of art whose artistic engagement makes a big contribution to the City of Mostar. 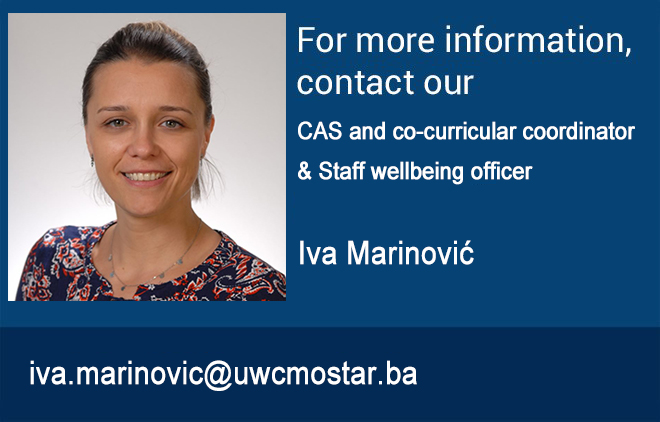